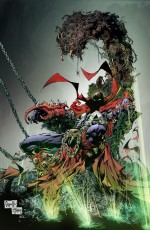 Last week, Image Comics held their annual Image Expo, making announcements for the new year.  Here are some of the highlights.

Three Big McFarlane Announcements
Todd McFarlane, Image Comics co-founder and “Spawn” creator, had a lot to talk about during the expo.

The first is big changes for “Spawn,” which celebrates Issue #250 this month and the return of original Spawn Al Simmons.  But the big news from the expo was Paul Jenkins will take the writing reins with “Spawn” #251.  Of course, Jenkins won an Eisner for the “Inhumans” miniseries and gave Wolverine an origin in the aptly-named “Origin.”  The change in writer comes with the promise of new directions.  “The frustrating thing over 20 years has been writers regurgitating my own stuff back at me,” McFarlane told Newsarama.  So, Jenkins is being challenged with breathing new life into the once best-selling comic.  He will be joined by Jonboy Meyers as artist.

The second announcement is, with the release of “Spawn” #250, all 250 issues will be available digitally on ComiXology.

And, third, McFarlane has co-written a new miniseries titled “Savior.”  Starting in April 2015, the eight-issue series is co-written by Brian Holguin with art by Clayton Crain.  According to Image’s release, “a man appears with no background, no memory, and no place to call home.  But this much is clear—this individual possesses certain powers, abilities that harken from the Old Testament…  Could he possibly be this corrupted world’s SAVIOR in the flesh?  Or will he be the world’s undoing?”

Will Vaughan Take More of Your Money?
As many of you know, “Saga” is a best-selling, creatively-acclaimed juggernaut.  Will lightning strike two more times for “Saga’s” writer Brian K. Vaughan?  The first new project is “Paper Girls,” an ongoing featuring four “newspaper delivery girls who experience something extraordinary one day…” said Image’s release.  Cliff Chiang is the artist.  The other new project is “We Stand on Guard,” a miniseries co-created by Vaughan and Steve Skroce.  According to the release, “The series follows a heroic band of Canadian civilians-turned-freedom fighters who take up arms against a violent invasion of their country by a technologically superior nation:  the United States of America.”

Snyder and Lemire Team-Up
Two of the biggest names in comics right now are teaming-up to bring you “AD:  After Death.”  Written by Scott Snyder with art by Jeff Lemire, this series follows a man as he deals with a world were there is no death.  Look for it to hit shelves in November.

Honorable Mentions
A few titles to look out for this year include “I Hate Fairyland” by Skottie Young; “Monstress” by Marjorie Liu and Sana Takeda; “Plutona” by Lemire, Emi Lenox and Jordie Bellaire; and “Starve” by Brian Wood, Danijel Zezelj and Dave Stewart.

View all posts by Phillip Smith