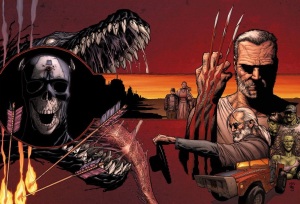 Recently, I read “Wolverine:  Old Man Logan.”  This storyline has received some attention in geek news circles as Hugh Jackman said during his X-Men:  Days of Future Past press tour he’d like to go out playing Wolverine in an adaptation of this story.

First, the what:  For those of you who haven’t read it, “Old Man Logan” takes place in a future where most superheroes are dead or in hiding/have retired after the villains actually team up and take over. Logan falls into the retired category, having a family and a farm.  Owing his landlords – the Hulk and his inbred family – rent, Logan takes a job heading cross country with Hawkeye, who happens to be blind.  Of course, excitement ensues.

With the current studio comic book ownership landscape where Fox owns the rights to most mutants, including Wolverine, and Marvel owns Hulk and Hawkeye among others who appear in “Old Man Logan.”  (Adding to that, Sony owns Venom, who makes a brief appearance.)  I’m surprised Jackman would tease geeks with his want to do the story.  Jackman should know the ins and outs of film licensing.  (He also said he’d like to play Wolverine as an Avenger…)  Unless the three studios (the Venom appearance would need to be in the film, just because it would have to) could come to some agreement, this is going to be Hugh and geeks’ wet dream.  (Of course, studios can come to mutual agreements.  In Who Framed Roger Rabbit, Mickey Mouse and Bugs Bunny and Donald Duck and Daffy Duck all appear even though they were licensed to Disney and Warner Brothers.  Warner agreed to have Bugs and Daffy appear if they shared the same amount of screen time with their Disney counterparts.)

I’ve only been discussing film licensing.  Marvel could create an animated feature featuring all of the characters, which could be very cool, but they probably wouldn’t get Jackman to do Logan’s voice.

The sad thing is “Old Man Logan” was pretty much written for the big screen.

For those of you interested in reading “Old Man Logan,” here are some more reasons to. Mark Millar and Steve McNiven wrote and drew the story, which were originally published as Wolverine #66-72 and Wolverine Giant-Size Old Man Logan.  Fans of Millar take note:  This story took place in the normal Marvel Universe, so the violence is at a normal superhero comic level.  Hinted at incest and cannibalism are as edgy as it gets.  For Millar, this is just the tip of the iceberg for his creator-owed comics.  McNiven is a solid artist, who worked with Millar previously on “Civil War” and recently on “Nemesis” and has done other Marvel comics.  Fans of 70s Spider-Man will be happy to see that Hawkeye’s mode of transportation is the Spider-Buggy, first seen back in Amazing Spider-Man #130.

As far as graphic novels go, “Wolverine:  Old Man Logan” should be on your must-read list, if you haven’t read it already.

View all posts by Phillip Smith